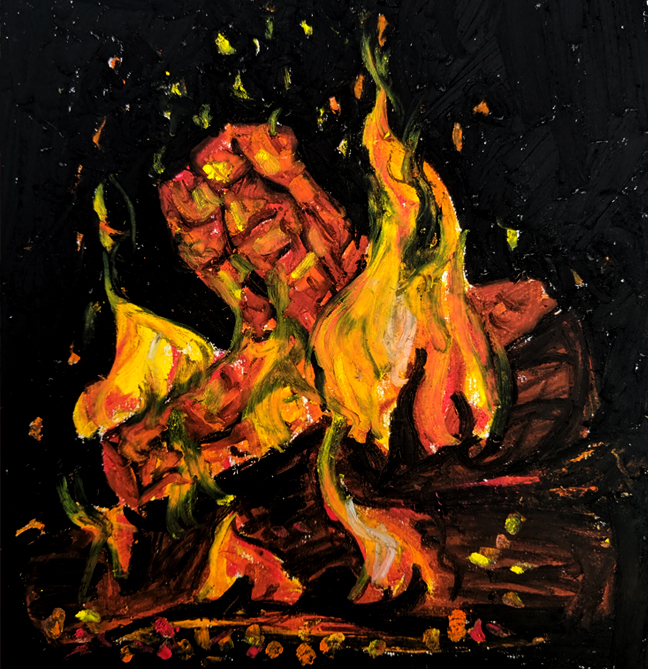 Sabina watched the fire. It’s eternal glow a warm and solid presence. She selected a few logs from a nearby wood stack and shoved them into the hearth. Sparks flew to the new kindling. The flames rose and the wood snapped and crackled. Vesta was a hungry Goddess. She consumed with a passionate intensity, a hunger that was never fully sated and it was the sacred duty of Sabina and the other Vestal Priestesses to ensure that the goddess never went without. They were selected for the high honour as children. They were trained, housed and compensated generously. Their voices mattered at council, a space reserved only for men. The Roman people held them in awe. All that the Goddess asked of them in return was their complete and unwavering devotion. It would not do to have a Priestess of Vesta distracted by the demands of home and family. She could not falter. The eternal fire must never be extinguished. The stability of Rome depended on it.

“You are deep in thought today, Sabina.”

Sabina rocked back onto her haunches. She smiled at her companion. “I am only contemplating the insatiable nature of our Goddess.”

Coelia nodded. “Ours is a passionate One. Full of youthful energy and the promise of bountiful life.”

Sabina nodded. “She is passionate. That is true.”

“And is it not from passion that all life stems?”

Sabina nodded her agreement once more. She scooted herself back onto the soft mat that lay before the hearth and settled in for the night. It was true that life stemmed from passion and true also that when women struggled to kindle life within their wombs, it was to Vesta that they turned. And it made sense that Vesta would be filled with youthful vigor and passion and heat, but Sabina also couldn’t help but see the irony in all of it. How could a Virgin Goddess, served by Virginal Priestesses, be the Goddess of Fertility? It was a thought that had begun to plague Sabina’s mind recently. A thought that she would rather not share with Coelia.

The night drifted into silence. Some night vigils were filled with conversation. Others were quiet like this. It depended entirely on the company. With Coelia it could go either way. The head priestess had a wealth of knowledge to share, if the novitiates dared to ask the questions.

Tonight, Sabina did not dare. Her mind was turmoil, but not because of uncertainty. No, Sabina’s mind was a mess because she already knew what the answers were. It would not help to voice her thoughts. Coelia would not respond kindly to them. None of the Vestal Priestesses would.

Sabina hugged her knees into her chest. She kept her eyes on the flame, watching them dance and flicker, their movements as rapid as her thoughts. She should never have moved into her own residence. She should have remained at the convent, eith the other Priestesses. Where privacy did not exist. But Sabina had moved out and she had found privacy. What seemed like a simple dream for a space of her own had become a curse.

“Tell me a story,” Coelia said. Her voice was soft, but clear against the cackle of the fire. “I need something to see me through the night..”

Sabina was quiet a moment. Her mind raced. She pushed and shuffled thoughts aside, digging deep to uncover something from beneath the fog. Sabina found the tendrils of a story and began to speak.

“The Goddess Diana had many Nymphs, but none were quite as beautiful as Callisto.”

It was only as the words fell from her tongue that Sabina recognised which story it was. She swore silently to herself. Of course it would be this one. What other could suit her conflicted thoughts so well? Coelia, for her part, nodded in approval. It was a well loved tale amongst the priesthood. Callisto was a character the Priestesses could relate to, but her tale also served as a warning. The thing with warnings was that they didn’t always land true.

Sabina continued the tale. “None could deny how her soft skin and round form ignited the lust of Gods and men alike. But the followers of Diana were not meant for men. As Vestal Priestesses do for their Goddess, Calllisto too had taken the vow of Chastity for hers.

But Zeus, having seen a prize he yearned for, would not be denied. So it was that the God disguised himself as a Goddess. He appeared to Callisto as Diana herself and seduced the unsuspecting Nymph. Callisto, unable to deny her Goddess, fell for the seduction.”

Sabina paused then. The fire cackled louder. Flame lept up and Sabina felt the heat like an accusation. And who was she to refute it? With Marcus, there had been no magic nor tricks. He appeared to her as he was, a man back from his first encounter with war. Not all men take well to bloodshed and death and Marcus had been one of these men. The experience had left him lost and confused. Sabina had simply wanted to help, to ease his mind and console his tortured spirit. Marcus had accepted her kindness. There had been no seduction. Not from Marcus and not from Sabina. But intentions did not matter. What should never have been a friendship to begin with had gone far beyond that.

“All would have been well,” Sabina continued, “had Callisto’s belly not begun to swell with child. They discovered her one day while bathing and knew that she had faltered in her vows. Diana and Juno alike were angered. Diana because her follower had betrayed her and Juno because she was the wife of Zeus. It was thus that Callisto was punished, banished from Diana’s flock and transformed into a bear by Juno. It was Callisto that would carry the punishment for Zeus’ trickery.

Coelia raised her brows at the last bit. No one ever mentioned that Zeus was to blame. Even though everyone knew it, it was always seen as just that only Callisto be blamed. Sabina swallowed. She should probably not have said it, but with her mind running rampant the way it was… Coelia said nothing, however, so Sabina continued.

“Callisto gave birth to a boy. The boy became a man and that man would come across a bear while hunting. He would ready his arrow and draw back his bowstring and with his eye sighted along the shaft, he would take aim. He would not know that he took aim at his mother’s heart. Diana and Juno would have let the arrow fly, but stirred by pity for his Demi-God son, Zeus chose to intercede. Callisto and her son were cast to the heavens, forever to be remembered as Ursa Major and Ursa Minor.

“And Juno, enraged by Zeus’ meddling forbid the constellations from ever meeting her waters,” Coelia concluded.

Sabina lapsed into silence. It wouldn’t be so bad, she thought, to be turned into a bear. And to be remembered in the stars? It was almost poetic. But Sabina would not be a bear and she would not get the stars.

Her punishment was death.